Of all the disciplines that form the actor training program, none is more vital, enriching and transformative than the Alexander Technique.—Harold Stone, Associate Director, Theater Department, The Juilliard School 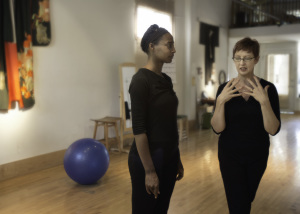 Actors have been using the Alexander Technique to enhance their performance for over a hundred years. F.M. Alexander was himself a Shakespearean actor who developed the Technique when he developed voice problems. The use of Alexander’s technique by actors and musicians spread rapidly. It is now a fundamental part of actor training in many major drama schools and music academies: RADA, LAMDA, The Guildhall, the Royal Academy of Music, the Royal College of Music, and the Trinity College of Music. It is also central to the training of actors at Juilliard in New York, Yale School of Drama, ACT in San Francisco and Howard Fine Studio in Los Angeles.

The Alexander Technique is like a connector that integrates acting, movement, and voice training. Actors need to be psycho-physically unified; they need to express impulses with authenticity and efficiency, without the painful awkwardness of personal habit.

An Alexander student learns to identify and change those habits of posture, breath, thought and movement that create strain and prevent free expression. He learns to reorganize himself by expanding into dynamic state of being, rather than trying to hold onto rigid positions or force movement.

Since everyday habits are magnified many times over in performance, it is important for the actor to learn how to re-direct her energy over a wide range of activities, minimizing unnecessary tensions, connecting to her emotions, and accessing creativity and spontaneity rather than “nervousness.”

Constance has taught the Alexander Technique to actors since 2001. She has been faculty or guest artist at acting conservatories and theater companies, and developed curriculum for actors and performers, as well as for other Alexander teachers at conferences and workshops.

“At the core of an actor’s training is the process of learning to respond truthfully in the moment to imaginary circumstances. Constriction of the body in the form of fear and performance anxiety causes a hyper-responsive nervous system over-contracted muscles and an unbalanced skeletal system. As a result, timing becomes erratic, lines and actions are anticipated, and emotional responses become forced or faked. The Alexander Technique can serve as a powerful catalyst for opening the actor’s instrument to the deepest resources of available responses in the moment of performance. The results are a blend of vulnerability and absolute commitment that can create riveting moments in the theater.” Meade Andrews & Saura Bartner

Introduction to the Alexander Technique Workshop for Performers

No matter what you practice, it is the HOW of your practice that determines the quality of your performance.

Stripping away unconscious tension leads to a deeper awareness and ability to find balance, support, and efficiency. Releasing personal habits of posture and movement facilitates character creation and fuller expression. Opening up to fuller connection to others allows authentic responses. Embodiment of a unified self, including body, mind, emotion, breath, voice, spirit, builds the art of living in the present moment.

This class includes movement, breath and body explorations. Bring an instrument, monologue or movement to explore. Everyone will receive individual hands-on guidance, group feedback and practices to help you work on your own.

Alexander is like the missing piece in connecting the physical and mental preparation of an actor.

Contact Constance to schedule this workshop or an ongoing class for actors.

Read an article on teaching Alexander to Actors by Constance

Read an article on applying AT to acting

delivered each quarter to your inbox